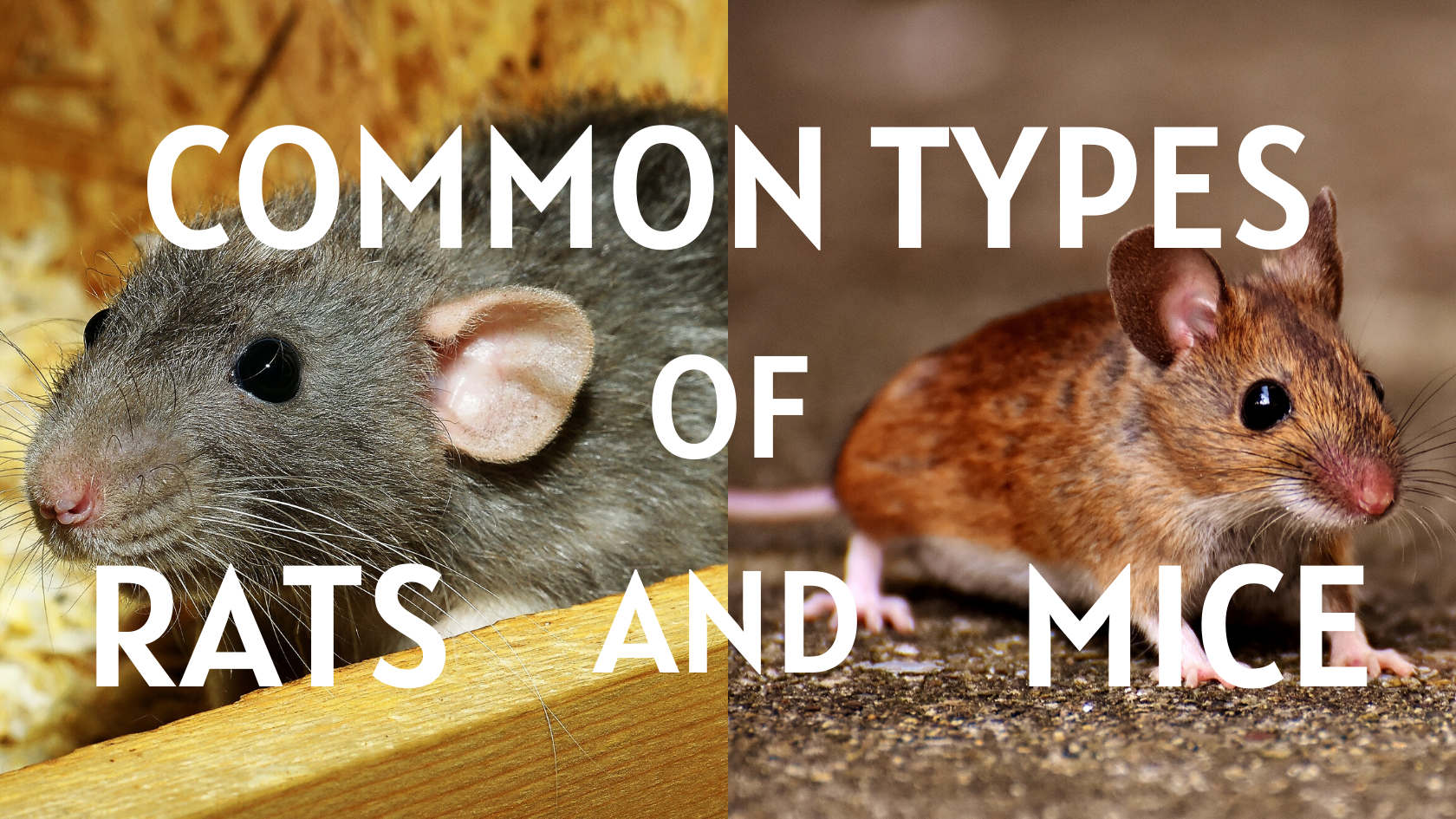 Rats and mice may have descended from the same ancestors millions of years ago, but they are certainly not the same species.

Both rats and mice have front teeth that are used for gnawing, and they chew with their cheek teeth. They will gnaw or chew on anything they have access to, such as cables and wires in your home.

The two most commonly found rats in houses are Norway rats, also called brown rats, as well as Roof rats, which are sometimes referred to as black rats.  Norway rats originally lived in forest regions with temperate climates, but they have adapted to life in populated cities.  In the United States, they primarily live in the northern states.  Roof rats, on the other hand, originate from the tropical regions of Asia, but have since spread throughout the world.  In the United States, Roof rats are typically found in the warmer, southern states. 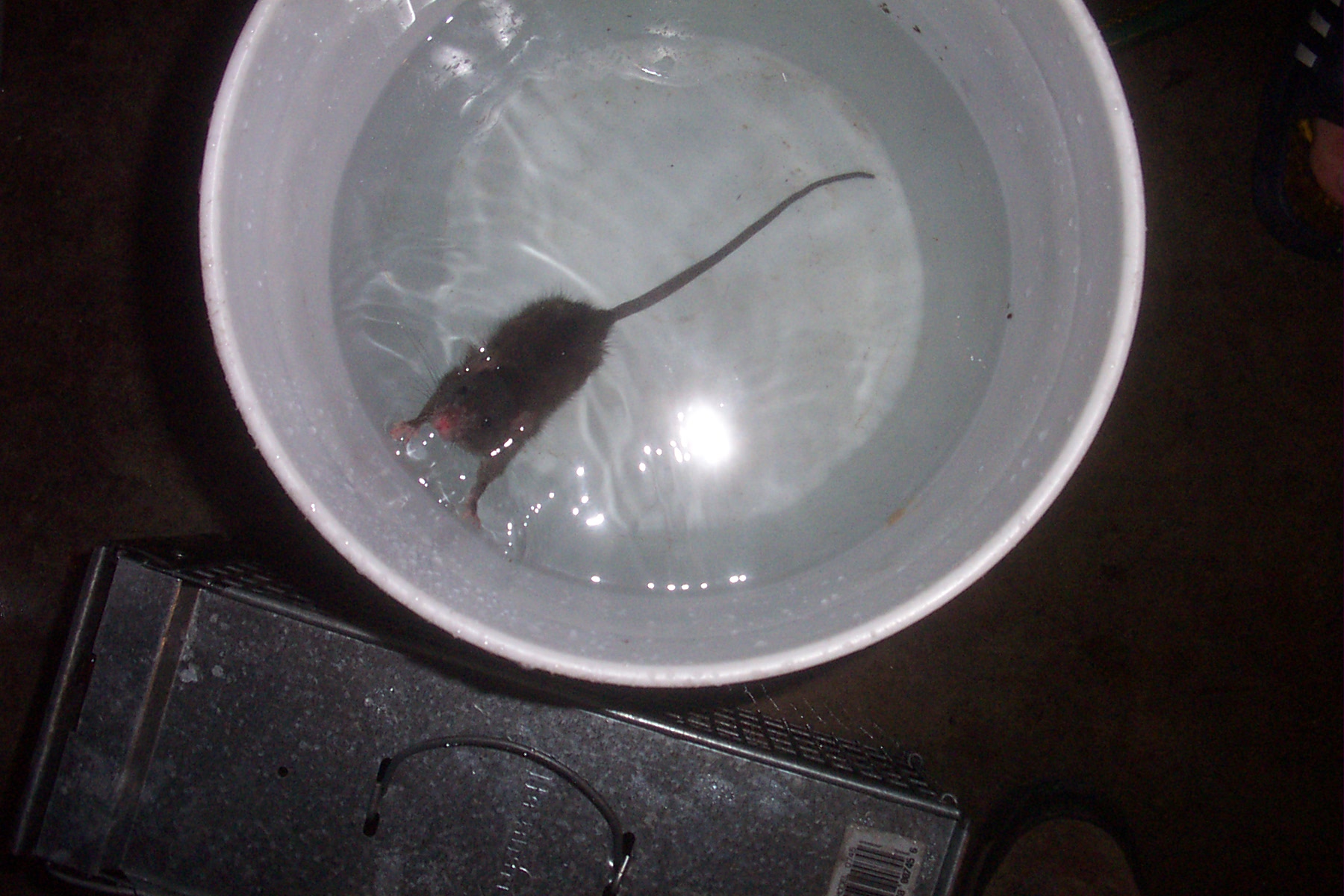 Norway rats are colorblind and have very poor vision.  They make up for their lack of sight with their highly acute sense of hearing, as well as the ability to sense ultrasound.  In addition, they also have a sharp sense of smell, which helps them seek out food sources.

Norway rats live on every continent except Antarctica.  They can be found wherever humans live, especially in highly populated cities where they have plenty of access to shelter, food, and water sources.  Although they typically burrow underground and only venture out at night to look for food, they occasionally take up residence inside a building, especially if they have access to water.  In a home, they will colonize in crawl spaces, basements, sewers, and attics.  They can cause considerable damage with their gnawing, chewing and burrowing.

Norway rats are omnivores, so they will eat both plants and animals.  They prefer grains, cereals, and nuts, but they will eat meat or any other food they encounter.  They can catch fish and smaller rodents, and they will eat dead animals as well.  Norway rats must drink water, as they can’t get proper hydration solely through food, so they will always colonize close to a water source.  In cities, they often live in underground sewer systems.

Norway rats mature at the age of two months, and they can breed year round in suitable conditions.  A female will have between eight and twelve babies at one time.  She can have as many as eight litters per year, although the average is around five.  Females are very maternal when lactating, but they will tend to smaller litters better than larger ones.  The lifespan of most Norway rats is a year.

Norway rats live in hierarchal colonies, where one rat is the “alpha”, with several levels of dominance beneath him.  If there is a lack of food in the rats’ surroundings, the rats at the bottom of the hierarchy will sometimes starve to death while the rats at higher levels of dominance feed.  Norway rats will also fight over living space if their colony becomes overpopulated; the weaker, less dominant rats are killed to allow more room for the others.

Norway rats sleep together and groom each other.  They also “play fight”, rolling, tumbling, and nipping each other much like cats and dogs do.  They are also nocturnal and will stay in their burrows during the day, unless it is necessary to come out for food.  Their burrows are often long and multi-tunneled with multiple entrances.  The rats store food in their burrows, sleep in them, and dive inside if they are startled by a noise or an intruder comes near.  Norway rats are also great swimmers. 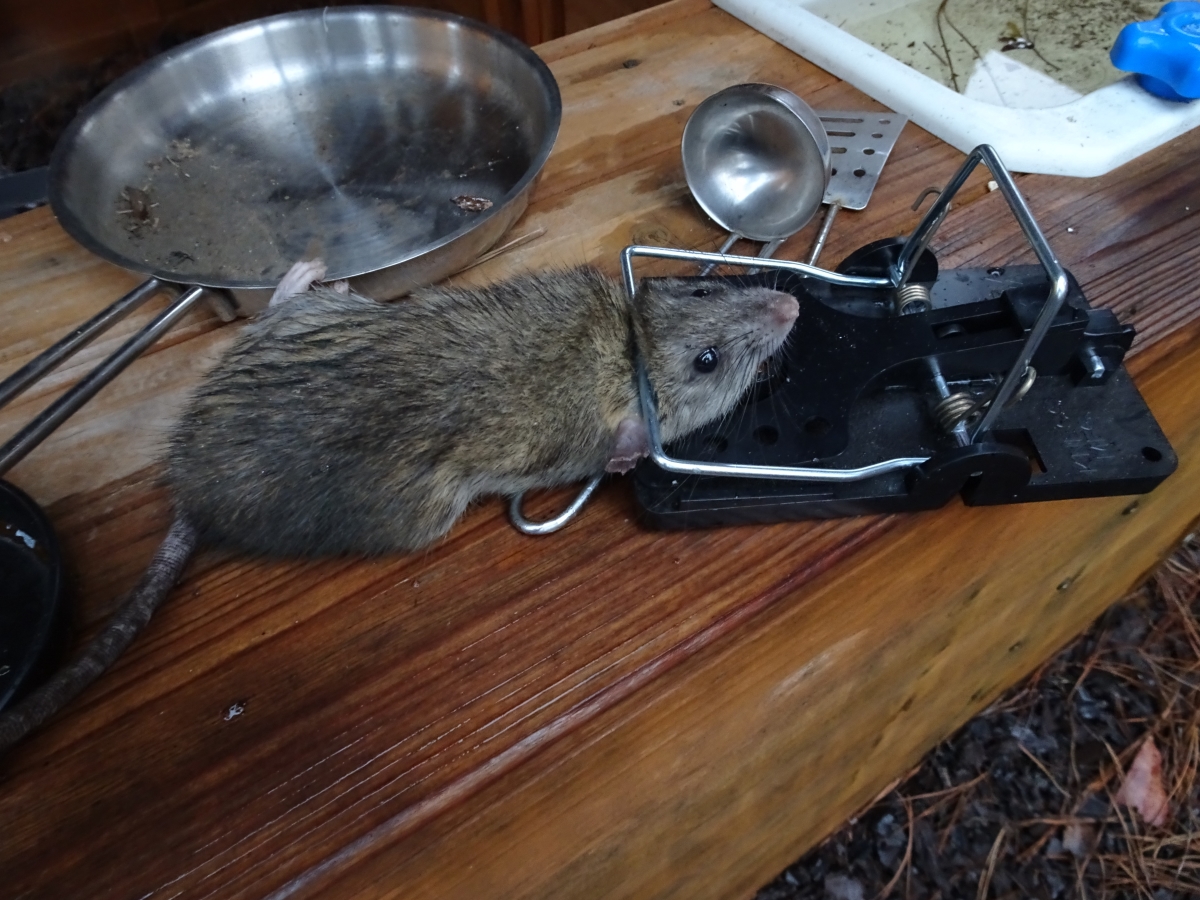 Like Norway rats, Roof rats are colorblind and can only sense differences in shades of objects.  They have an acute sense of smell, which they use to locate food and to distinguish among other members of their colonies, particularly those of the opposite sex.  They also use their sense of smell to locate their previous travel routes.  In addition, they have highly sensitive whiskers that they use to help guide them through narrow areas and along walls.  They also have very good balance, and are capable of climbing along narrow wires and similar objects, using their long tails to help keep them balanced.

Roof rats live in agricultural environments as well as populated areas.  They are rarely found in sewers and similar settings, as they prefer higher nests.  They will often colonize a building or home on its upper levels, accessed via trees and utility lines.  In addition to attics, Roof rats will also colonize inside of walls and false ceilings.  Although they will burrow underground if needed, they prefer to build round nests of leaves, sticks, and any other material they can shred.

As with Norway rats, Roof rats are omnivores.  However, most find a diet of plants and vegetation to be sufficient.  They often get into pet food and livestock feed, but tend to prefer nuts and fruits.  They will eat insects and birds as well.  They are foragers, and rarely deplete a food source.  Instead, they will eat a little and store a little, especially if the food can’t be eaten quickly, and they will then move on to a different food source.  They have a diet with higher water content than Norway rats, and therefore don’t necessarily need access to water all the time.

Roof rats mature at about three months of age, at which point they are capable of reproduction.  The gestation period of a female is about three weeks.  She will have between five and eight babies per litter, up to six litters per year.  The babies are hairless at birth, but grow hair within a week.  The young will nurse for about five weeks, then begin foraging for and eating regular foods.  Although spring and fall are the most typical times for breeding, if circumstances are suitable, Roof rats can reproduce year round.

There is a hierarchy among Roof rats similar to that of Norway rats.  The more dominant rats have better living areas and access to more food than those who are lower in the hierarchy.  Less dominant rats will also be kicked out of the colony if lack of space becomes an issue. Because of this hierarchy, there may be several nests in a given home or building.  Roof rats are much harder to control and remove from buildings if an infestation occurs, due to their tendency to nest inside of walls.

Roof rats aren’t good swimmers like Norway rats, but they are excellent climbers, and run much faster than Norway rats.  They are nocturnal, and will do most of their foraging and nest building at night.  If they can access indoor shelter to build a nest in, they will choose the shelter over making an underground burrow. 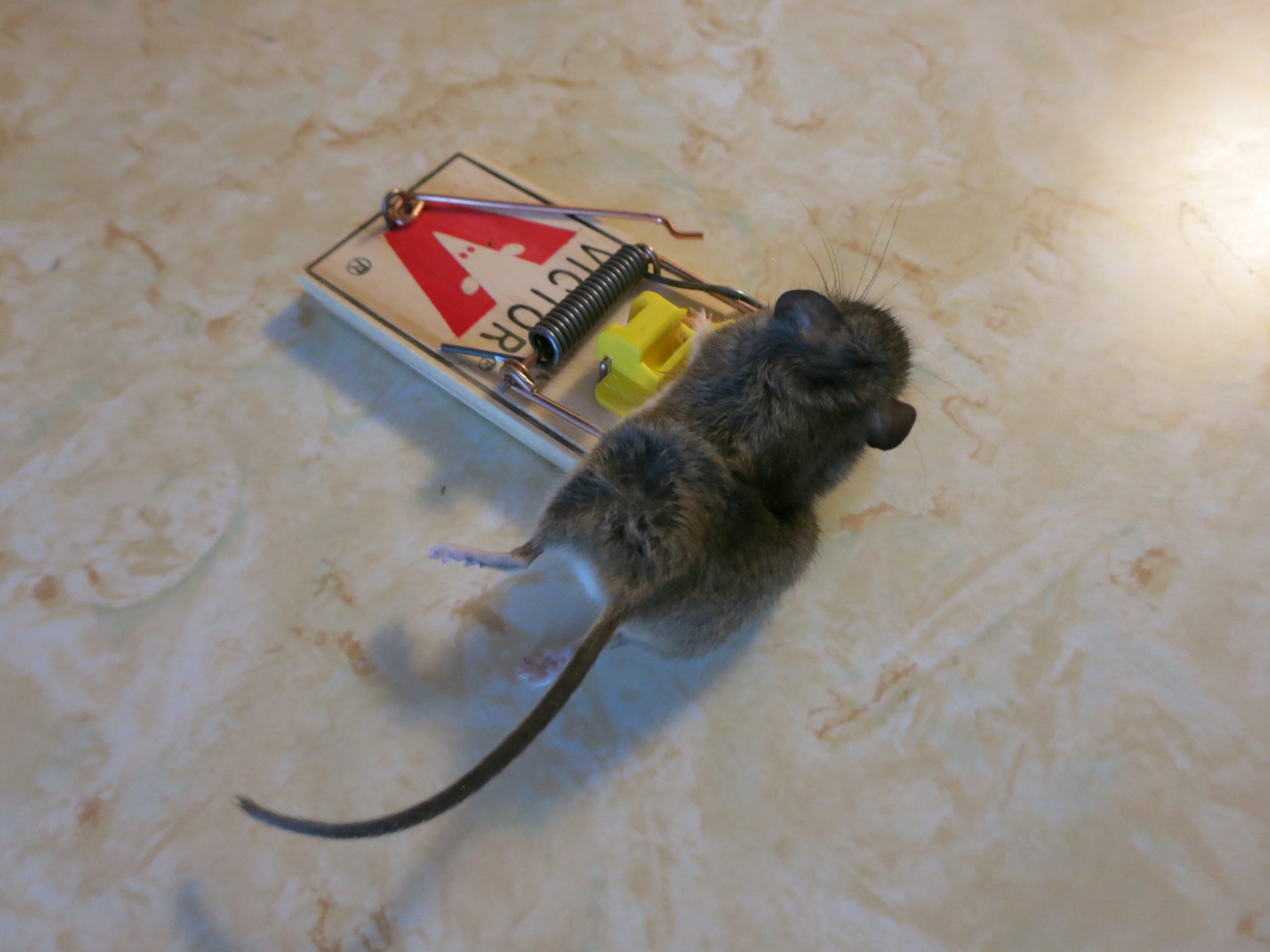 A house mouse is the most likely type of mouse to make a home inside a building.

Like rats, house mice cannot detect color.  They have an extraordinary sense of hearing, however, and can hear in the ultrasound range.  They have an acute sense of smell, and rely heavily on pheromones to sense the other mice in their colony.  House mice have the ability to sense the pheromones present in urine, which can cause changes in reproductive cycles.  They use their whiskers to help them travel at night through small spaces.

Although house mice will live in fields or other outdoor habitats, they prefer indoor shelter, especially during cold weather.  House mice make their homes in buildings near food sources, usually building their nest within 20 feet of their food supply.  They shred paper, cloth, and similar materials to form their nests.  Females tend to stick close to their nests with their young while the males retrieve food.

House mice are omnivores, but they usually eat plants rather than animals.  They prefer grains, but like most rodents, they will eat whatever food they can find.  Because house mice are so small, they can access food supplies stored in cupboards and pantries.  Even though they may eat very little, they contaminate everything they come into contact with, and leave their droppings as well.  They will sometimes eat their own droppings as a source of nutrition.

A pregnant female house mouse has a gestation period of about three weeks.  She will give birth to an average of five to eight babies up to ten times a year; however, litters as large as 14 are possible.  The babies are born without hair, which will start growing when they are three days old.  Males mature at eight weeks and females at six, but they are capable of reproducing as early as five weeks of age.  If indoors, house mice will reproduce year round, but if not, they will stop reproduction when the weather is cold.  House mice can live up to two years indoors.

House mice are excellent jumpers, swimmers, and climbers.  When they are eating, they will stand on their hind legs.  They also stand on their hind legs when they are aggressive, such as when they come in contact with another mouse or a predator.  They usually run with their tails straight up to help them stay balanced.  If frightened, their tails will stay down when they run.  House mice are nocturnal, so they do most of their foraging and nest building at night, away from light sources.

A male house mouse will typically live with several females.  Males are very territorial and usually don’t cohabitate with other males.  Most of the time, less dominant males will avoid the territory of a dominant male.  Males can be quite aggressive with each other and predators.  Females are much more docile, usually remaining close to the nest with their young.